Art In The Age Of The Internet

Eva Respini, accompanied by Jeffrey De Blois, is the curator of the Art In The Age Of The Internet, 1989 To Today exhibition, at the Boston ICA, where the works are based on five sections questioning the relations that artists have with the Internet, to interrogate societal mutations. 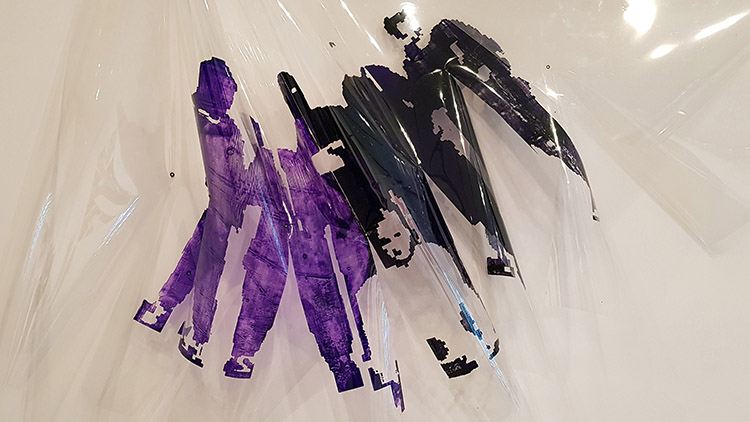 The first room in this exhibition questioning art in the age of the Internet interrogates images circulation. It is here that Seth Price’s work, claiming a 'redistribution practice', is presented through his Still, Five Hooded Men with Seated Man installation of 2005. The folds in a polyester film hooked on the wall complicate our understanding of the image that comes from an execution video, as there are all over the Internet. Its two-colored processing, which discloses some altered pixels, betrays the manipulations that it has been subjected to, without losing its emotional charge due to the horror of the situation. It belongs to a series of images that the main Internet authorities try to regulate, although these images manage to find their way towards eyes eager to see obscenity. As regards to Seth Price, his activity enters into the data flow, of which he knows the extreme instability. According to Marcel Broodthaers “The definition of artistic activity occurs, first of all, in the field of distribution”. Seth Price redistributes in the artistic world the images that he previously “altered” without interrupting the flow. 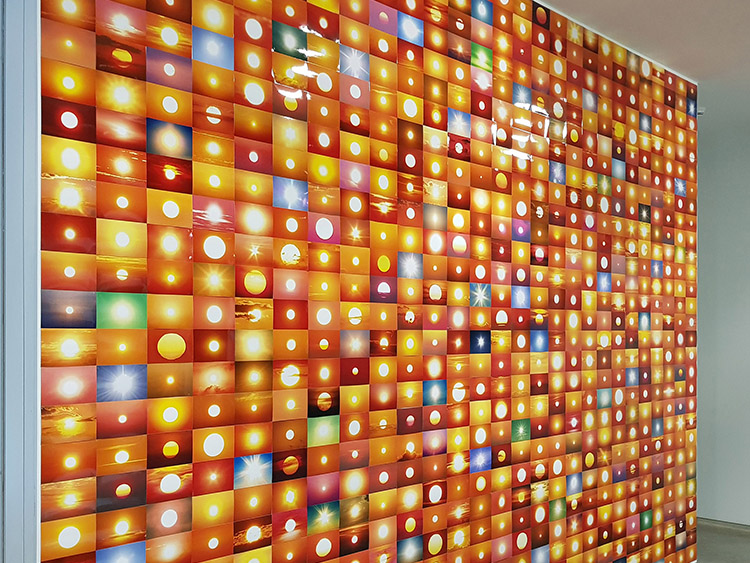 In 2004, a time of changes when the Web was becoming participative, an American company, Flickr, launched its photo-sharing platform. Like Penelope Umbrico, artists and non-artists from all over the world quickly used the platform in order to create. It is in 2006 that she introduces her sunset collections that she assembles in a number of ways according to each exhibition. The Boston ICA installation is entitled 33,930,594 Suns from Sunsets from Flickr, a work in progress of a series and the titles evolve over time. The material of this series is one of the most photographed subjects in the world: sunsets, when the sky is literally set on fire. Penelope Umbrico keeps on gathering the photographs to rearrange them in a grid, for photographic installations, as in the duration concerning her video creations. The pictures are pleasant, but the method is radical, not to say obsessional. In Boston, each sun is at the center of the photographs. In other situations, the silhouettes of the people striking a pose would stand out. As for Penelope Umbrico, her collection is part of a trend named Post-Photography. 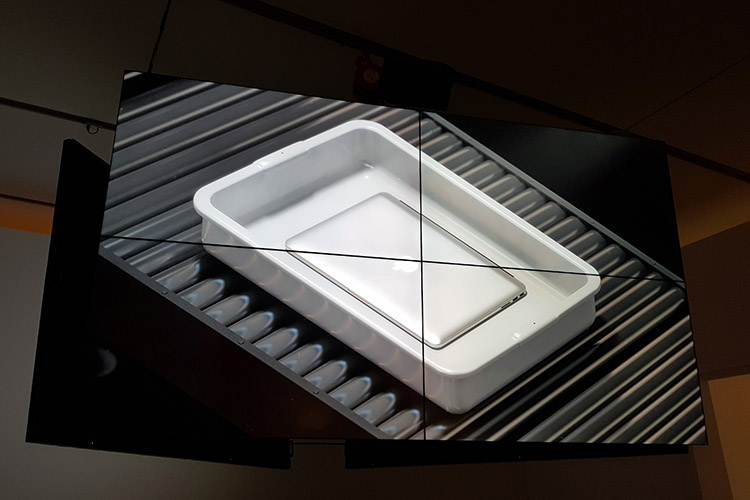 The second part of the Art In The Age Of The Internet exhibition is dedicated to the body and its possible hybridizations that machines are particularly able to compute. Ed Atkins is presented there with his Safe conduct installation of 2016, made up of three suspended screens. It was inspired by animations that are meant to tone down the safety measures at airports. Then, our boarding pass in hand, a form of safe conduct, we are ready to board. Ravel’s Bolero strengthens the idea of a scenario that stretches with the duration of its infinite variations, while the metal detector’s roller loops infinitely. In this airport recreated by the artist, the character is alone, as we are sometimes in the middle of a crowd. And it is there that everything changes, as he takes off his face that was hiding another similar face. The trays, which are at this only passenger’s disposal, receive objects that go from a laptop to the man’s guts. Thus, the metal detector takes the air of a slaughterhouse where animals’ organs and limbs, which have ended their journey, are sorted. By its extravagance, Ed Atkins’ work is conducive to individual interpretation, as airport safety measures are to personal projection. 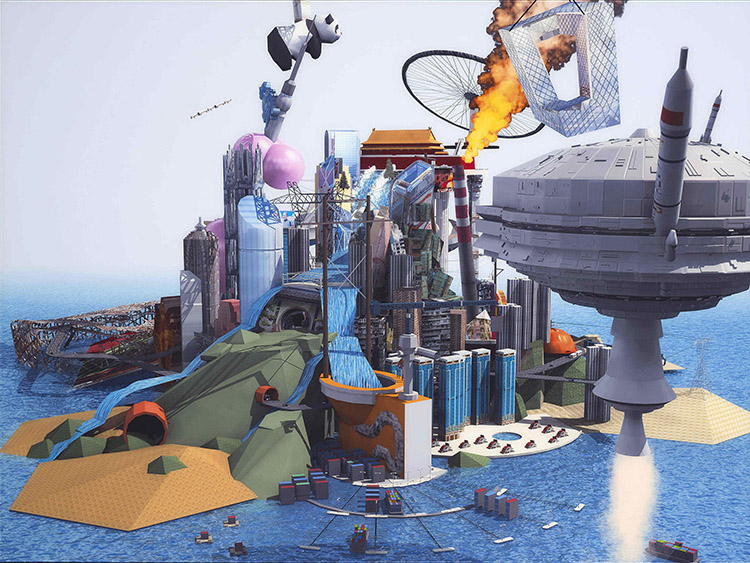 What would this exhibition be without integrating virtual worlds into it, as with Cao Fei’s RMB City: A Second Life City Planning? Initiated in 2007, the performance is already 'historical' if we consider Linden Lab’s online virtual world relative disaffection, which fascinated us in the 2000s. The artist built her ideal city in order to offer it to ordinary people’s extroverted avatars. A performance, which is now historical if we acknowledge that ten years later these same photo and video documents are exhibited in contemporary art centers, museums or foundations. Cao Fei, also known as China Tracy in Second Life, designed a city that look like Chinese megalopolis, where tradition is inextricably linked to the future, without forgetting pollution and the proliferation of cranes symbolizing urban reconfiguration. The metamorphosis of a city is always violent. But today, Baron Haussmann who totally restructured the city Paris would have to deal with its inhabitants. As regards to the name of this city, 'RMB', it alludes to both the Chinese Yuan or Renminbi (RMB), hence to the powerful who influence the appearance of our cities, and to the Right Mouse Button (RMB), which allows us, in the virtual world, to act on the environment surrounding us. 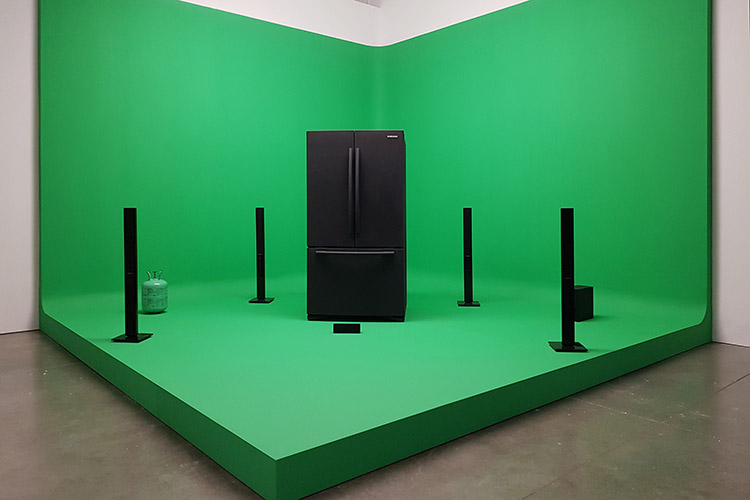 Inanimate objects finally come to life, or rather they are given intentions, as companies such as Samsung connect them. Nowadays, who is surprised to see a refrigerator of the same brand being “intelligent”, as our smartphones already are? Its blackness, in Mark Leckey’s Green Screen Refrigerator Action installation of 2010, gives it the air of a monolith inevitably coming from an elsewhere. But the latter expresses itself in the first person, and the artist himself lends him his voice digitally transformed. This talking refrigerator thrones in the middle of a green set, which is widely used in cinema as in advertising when it comes to create situations. The intelligence that we give to our daily objects still needs staging. Without it, we would only hear a litany of words without trying to pay attention to it. Would the combination of the words “artificial” and “intelligence” not be enough to throw us into an ideal where all the components of our close environments would immediately be answering to our least desire and without anything in return?

The art of disappearance 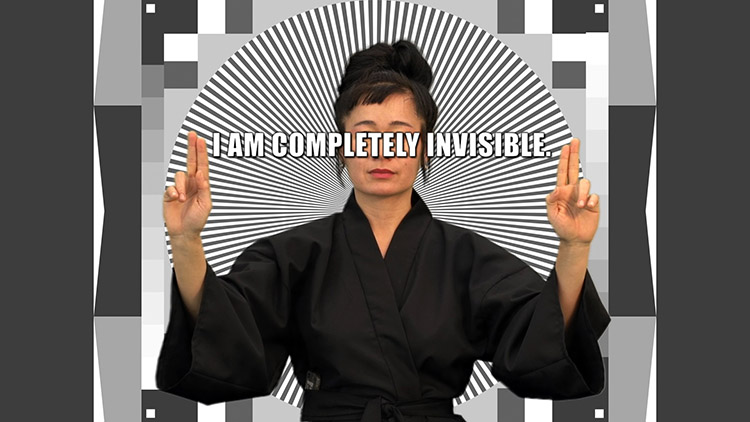 Hito Steyerl, How Not to be Seen. A Fucking Didactic Educational .MOV File, 2013.

In the exhibition, Hito Steyerl is here through her Liquidity Inc installation, while Eva Respini quotes her video sequence entitled How Not to be Seen in the States of Surveillance catalog section. It is a sequence in which voices’ absolute neutrality, as images’ relative lightness, are at the service of the art of disappearance. It is a sort of documentary at the age of the generalization of tutorials, which actively participate in the culture of the digital natives. Here, it is still about the green, of which we know the ability to help mask beings, objects or even settings in post-production. As of surveillance, it is mentioned by the recurring of a pattern designed by the United States army in 1951 in order to test the efficiency of aerial photography. This pattern, which was abandoned with the advent of digital allowing a higher level of detail, evokes the world of yesterday that is disappearing. As this Californian desert fragment, still covered by this same pattern, which is used as a setting for director Hito Steyerl’s movie, whose tutorial is resolutely political. 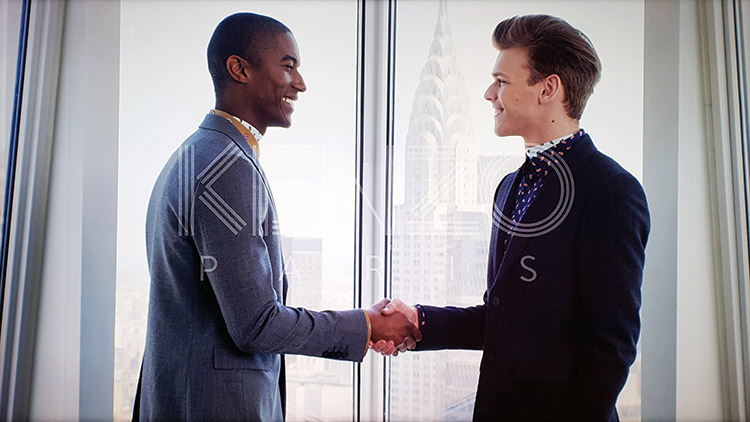 In this exhibition, artists such as DIS collective, of which we know the ability to move the lines between art, media, fashion and brands, approach the question of identity. The video sequence offered in this museum context is entitled Watermarked (2012). It has also interested the fashion world, which recognizes a lookbook parody. The Kenzo watermark is stamped in this video sequence and we are encouraged to recognize the brand’s values. Young people, with stereotyped gestures and of whom the diversity recalls the 1990s’ Benetton ads, display forced smiles. A music alluding to institutional communication is in coherence with the extreme perfection of this presumed advertising announcement. The stereotypical style, by the members of the DIS collective, is here to denounce the visual identities that are imposed by brands. And it is with some cynicism that they move the lines, going from one world to another. Their continuing back-and-forth between the art sphere and the brands sector makes the reading of their message more complicated. Let us also mention that the Kenzo brand belongs to the LVMH group, managed by Bernard Arnault, an art collector who is widely appreciated by galleries and institutions!

As close as possible to reality 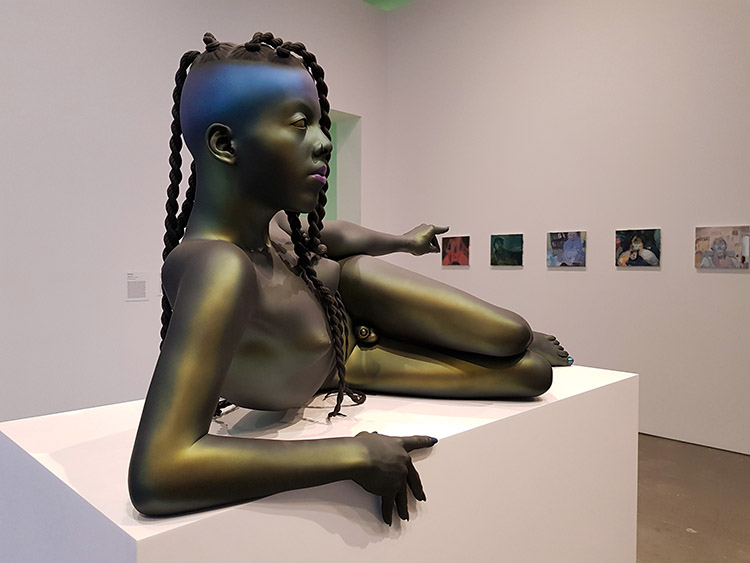 Let us end with this sculpture representing intersex artist Juliana Huxtable by Frank Benson. We inevitably think of the Sleeping Hermaphrodite at the Louvre museum, which is a Roman copy of a Greek statute, dating back to the 2nd century BC. But Juliana, as it is the title of the work, is staring at us while affirming her intersexualization. Moreover, her three-dimensional representation is as close as possible to reality, because it comes from both scanning and printing that are possible through today’s 3D technologies. Its metallic colors certainly helped this image of “Juliana” spread on the Internet. Considering that the LGBT community seized it. Digital having revolutionized image and sound practices, it is now sculpture that is evolving more and more as technological innovations enter artist’s studios. Institutions such as ICA Boston are taking this into consideration through exhibitions such as “Art In The Age Of The Internet, 1989 To Today”. This event, without any doubt, will be remembered thanks to a 300 page catalog as documentation to make the exhibition last.