In 2020 everything stopped, or almost, though artists continued to create, confined to their studios, sometimes limited to the surface of their screens. Their works emerged online or in exhibitions, between two lockdowns. A look back at a particular year. 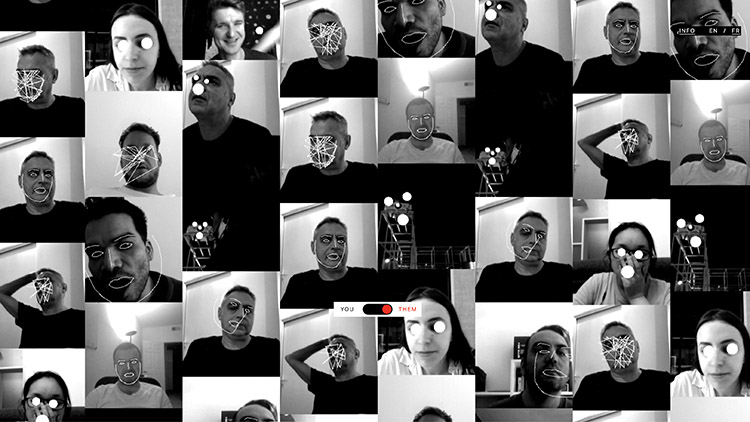 We really took the measure of the situation that was settling in when our cities suddenly emptied. And if there is one creation that evokes the experiential cultures that emerged during the lockdown, it is Daniel Iregui's. The title, Anticorps, refers to the fact that at this very moment, we were singularly lacking in them, so keeping a distance between bodies became the rule. More than ever, we rushed to video conferencing services. And this is precisely what inspired the Montreal artist to propose that we re-enchant the constraints of our exchanges. Going to antibodies.webcam requires activating your camera before assuming a few poses, as is the trend when taking a selfie. Then, a second stage mixes our faces with those of others according to the cinematographic shot reverse shot technique. In this very particular period, the grid – the very one of the 20th century avant-garde – has become the venue of preference for our socially distant exchanges. 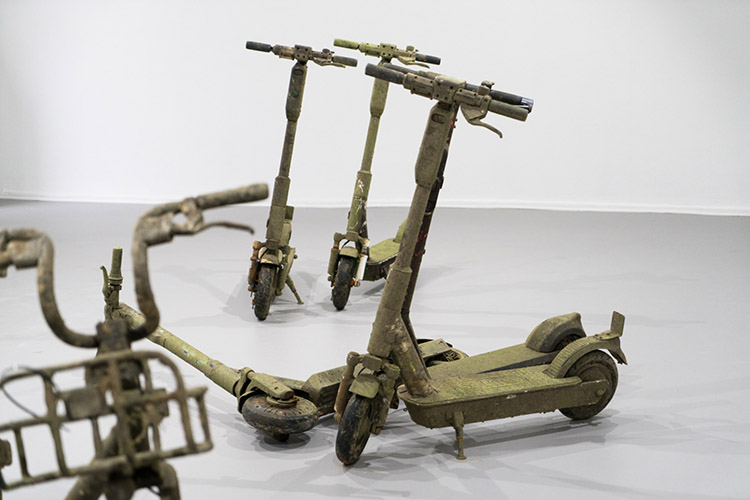 Fleeing public transport, people switched to electric bicycles and scooters accessible via platforms such as Lime. Lime’s slogan, Unlock Life, inspired Aram Bartholl, who implemented this exhortation by creating an installation with the eponymous title. In doing so, the German artist questions us about our management of the common goods that digital platforms make available in public space. With an initial installation in 2018, Your parcel has been delivered (to your neighbour), Aram Bartholl made us aware of the bicycles that are carelessly thrown on sidewalks. With Unlock Life, he tracks down the electric scooters that users have thrown into Berlin's canals. This practice of a new form of underwater archaeology in an urban environment allows him to present the scooters collected in the exhibition. Immersed for a while, they have lost their attractiveness because their bright colours are covered with algae. The uncivil act of detaching oneself from electric scooters by submerging them has literally unlocked the life forms that have developed on their surfaces. 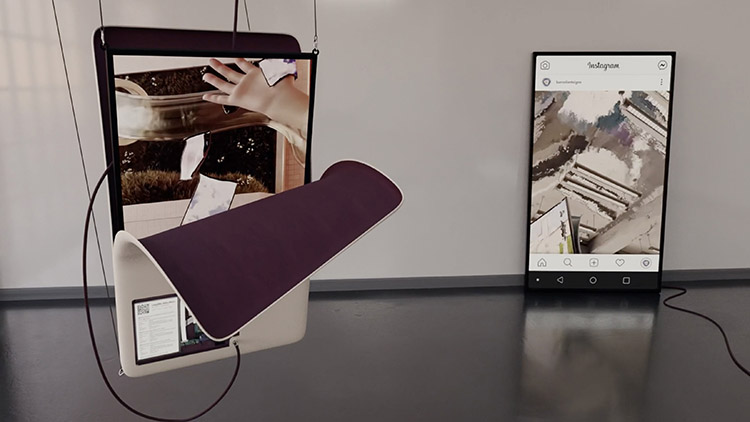 Hindered in our travels, we scanned artists' sites more often than usual, spotting a few creations such as Tangible Data by Baron Lanteigne. At the same time, the value of Bitcoin reached record levels. It is with this cryptocurrency that many of us discovered the potential of blockchain secure data storage technology. And it is with such technology that platforms are currently being developed that connect digital artists with adventurous collectors. Last summer, the Quebec artist therefore decided to investigate the emerging cryptoart ecosystem through his Tangible Data project. The three-dimensional animations he designed for this purpose are based on the staging of exchanges between artists and cryptoart enthusiasts. His sequences also question the relationship between the creations of this new art trend and their immateriality. For Baron Lanteigne contextualises them in exhibition spaces which, although just as simulated, connect them to the materiality of the white cube of contemporary art.

A desire for materiality 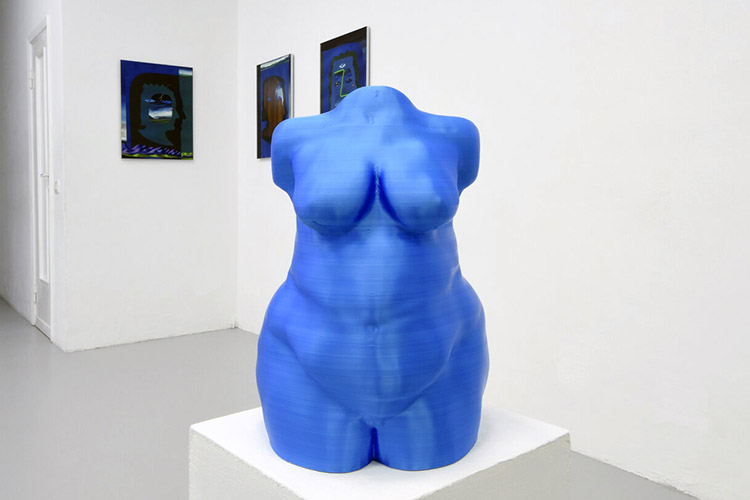 Comfortably seated in front of our computers, our bodies relax in the image of Buddha representations or of Palaeolithic Venus. These postures inspired Kamilia Kard in 2017, when the artist initiated her Woman as a Temple series. One could then contemplate the sculpture of a woman's body without limbs or head during the ‘second wave’ at the Odile Ouizeman gallery. The Italian-Hungarian artist modelled these generous forms before printing them in three dimensions. The intense blue of this smoothed torso is reminiscent of Yves Klein's anthropometries of bodies without arms or heads. By printing the 3D model, she could have preserved in the virtual space where it was created, Kamilia Kard perfectly illustrates this desire for new materiality that we feel when our environment, day after day, becomes a little more virtual. It is interesting to note that in parallel to the development of VR headset – to which Kamilia Kard is equally attached – 3D printers are multiplying in artists' studios. As though with the 3D medium, our attraction to the virtual went hand in hand with our attachment to the real. 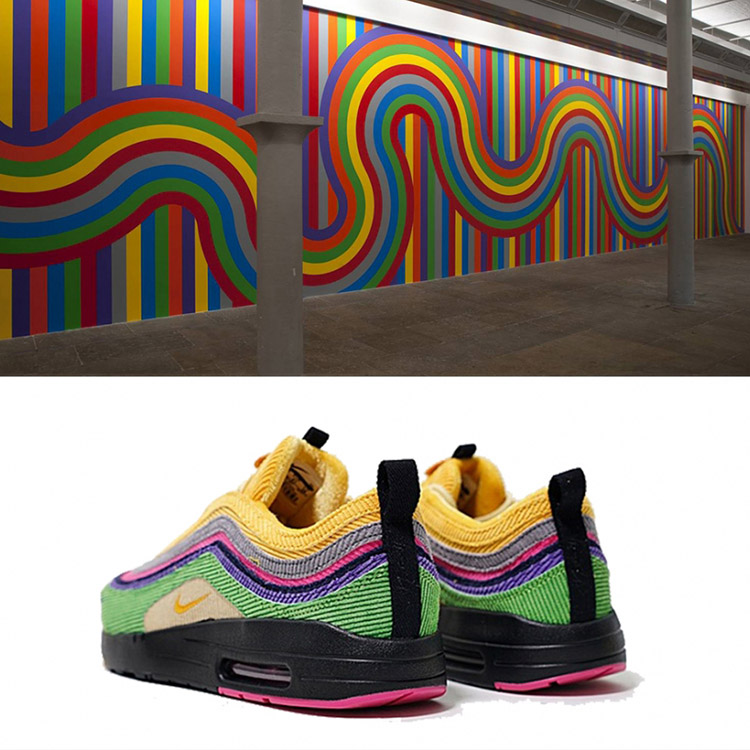 As culture became ‘non-essential’ in institutions, we rushed to the galleries that had become ‘essential’, such as the 22,48m2 where, in the autumn, we could observe a few aesthetic ‘collisions’ organised by Caroline Delieutraz on the occasion of her art_and_sneakers project. This is a long-term survey that the French artist carries out in shops but gives shape to online. Since 2018, she has been compiling a list of sneakers that, in her opinion, are in dialogue with the history of modern and contemporary art. It is on her Instagram @art_and_sneakers account that the comparisons are made before being exhibited. As art is already compatible with research, science and technology or business, why not also associate it with brands of sneakers that are particularly creative and inspired in view of the diversity of their offers? This makes it possible to verify the porosity of the fields, because we have known since Marcel Duchamp that there is a coefficient of art in any object of everyday life. Why not sneakers?

From one crisis to another 2020 was a year of successive crises, ranging from health to social, the two sometimes intertwined. It is in such a context, and between two lockdowns, that Le Fresnoy was nevertheless able to inaugurate its Panorama exhibition with, among other creations, the film Contraindre by the duo fleuryfontaine. They collected video sequences entitled ‘police violence’ on social media before having them reinterpreted on a motion-capture set to, in the end, control three-dimensional models of humans. The violence is thus simulated through choreographies of constraint, where the whiteness of genderless bodies with shaved heads evokes Butō, the Japanese dance that so perfectly expresses suffering. When the bodies come together and finally pile up on top of one another, we think of even darker historical situations. As for the text, declaimed by a voice-over - "I have just entered my role. And whether I accept it or not, this is the role they want me to play, it is the role I was given, from the beginning, at my birth, and even before" - we each interpret it differently according to our own history. 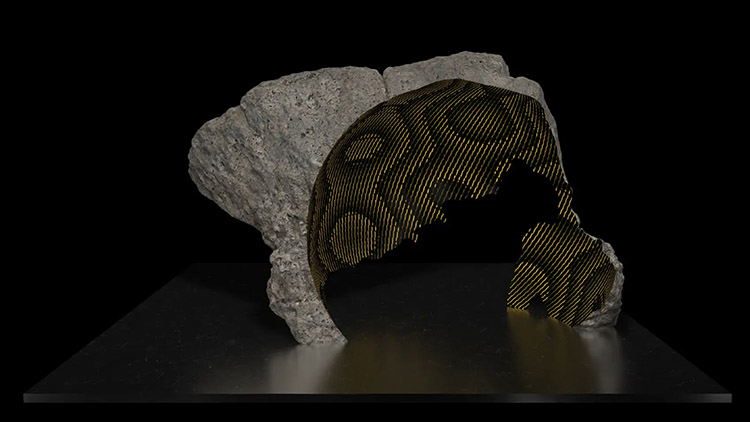 Art galleries have adapted to government injunctions by extending the duration of their exhibitions, as is the case at Charlot, where you can still discover the creations of the Cores series by Nicolas Sassoon & Rick Silva. Together, they initiated the collaborative project Signals from which the Cores series emerged. It consists of eight sequences presenting stones with disturbing strangeness. Having been scanned, they are represented in three dimensions on trays that give the collection the appearance of a cabinet of curiosity. They also have in common that they are partially covered with geometric patterns that refer to both mathematics and nature. The curious stones that slowly evolve before our eyes encourage us to observe them as mineralogists would. Let us remember that it is by observing the rocks of a site as well as of a planet that we establish its history. But they also call to mind the arts and sciences of occultism, which attributes to them the mysterious energetic virtues that the moiré patterns on their surfaces suggest. 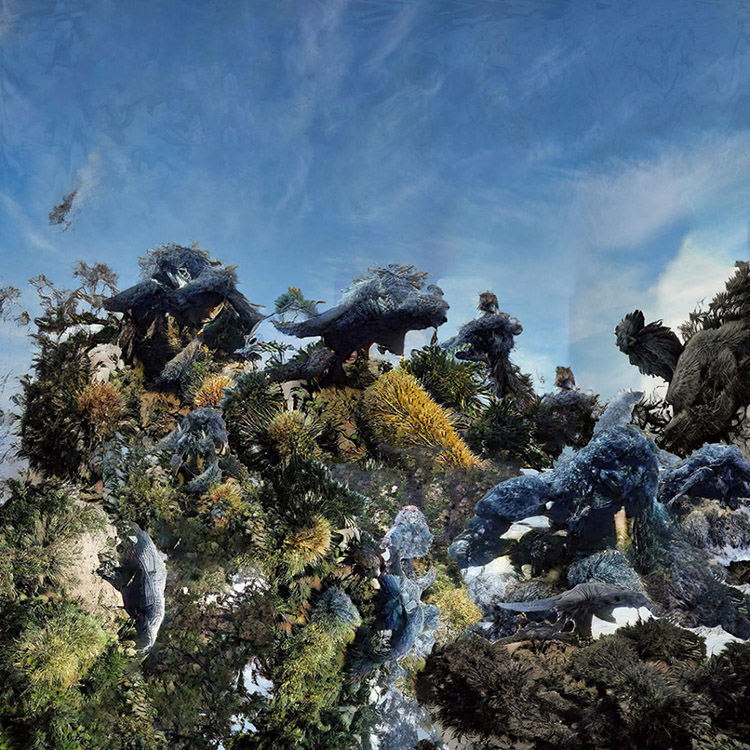 If there are places that have never really closed, it is the artists' studios, as in the many to be found in the Poush Manifesto. Precisely where Grégory Chatonsky's creations, including his latest series entitled Îlots, are currently being shown. In his landscapes, whose generic title leads us to believe that they are preserved, we never know exactly the nature of the details observed, so much so that the mineral blends with the vegetal. Fortunately, the fragments of sky that we immediately identify manage to reassure us. As for the confusion that is established with doubt, it is perhaps due to the fact that these are iterations rather than representations. For the French artist uses artificial intelligence, and more precisely recursive neural networks that he feeds with large quantities of image data. Whether he is in his studio or not has little influence on the way his machine, having observed so many landscapes, computes new ones. Gregory Chatonsky has established the rules allowing his algorithms to imagine fragments of nature "from memory" as painters do after having drawn many sketches in situ. We all make this effort of imagination when we ardently wish to remember a past situation while waiting for its possible re-actualisation.