It is difficult to have a clear-cut opinion of the Biennale because the artistic proposal in Venice is so abundant. In the national pavilions, from the gardens to the Arsenale halls, to the city's palaces and other collateral events, thousands of artworks are on display. 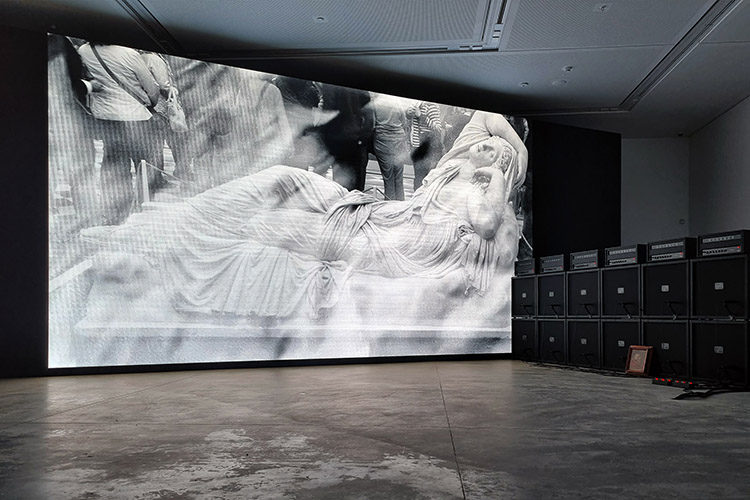 A strong rock sound draws us to the Australian pavilion. The ‘noise’ music that Marco Fusinato performs here is particularly rough. Sitting on a flight case, the artist performs with his back to the audience as if to oppose the figure of the guitar hero. He manipulates rather than plays electric instruments whose sounds are modified by certain effects, and a loop with a wall of speakers and amplifiers that look like a sculpture. The high sound level discourages a significant part of the audience, while others literally let themselves go. Add to this the images that follow one another at a frantic pace on a large LED screen. Deprived of the time it would take to assimilate them all, they help to encourage us to let go. The experience is highly sensorial as there is no doubt that every one of our cells is stirred by the infinitely stretched vibrations of this performance-installation of a sound art form that ordinarily, is rare in the Giardini of Venice.

In the central pavilion 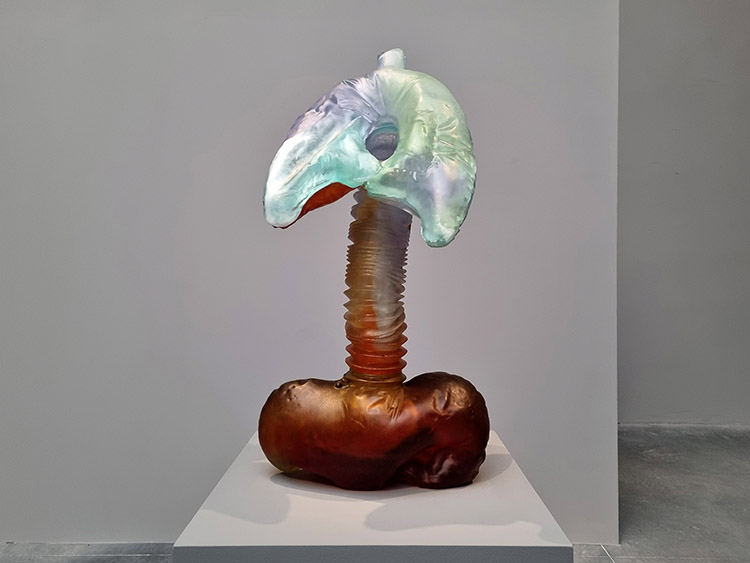 Venice is also the perfect interweaving of market and institution, if we consider the omnipresence of international galleries such as David Zwirner's representing, among others, Andra Ursuţa. The nine sculptures by this Romanian-born artist, who lives and works in New York, presented in the central pavilion are strikingly hybrid, and this in many ways. From a formal point of view, they are assemblages of body fragments that have been fused with everyday objects. Their manufacturing process also participates in a form of hybridization of ancient techniques, such as that of lost wax casting, with more technological practices such as three-dimensional scanning. However, a profound unity of style emerges from this series of glass pieces with their infinite shades of color. The molten glass, as it cools, seems to have fixed the reminiscences of an artist's daydreams to summon the highly liberating style of ornamentation that is the grotesque. 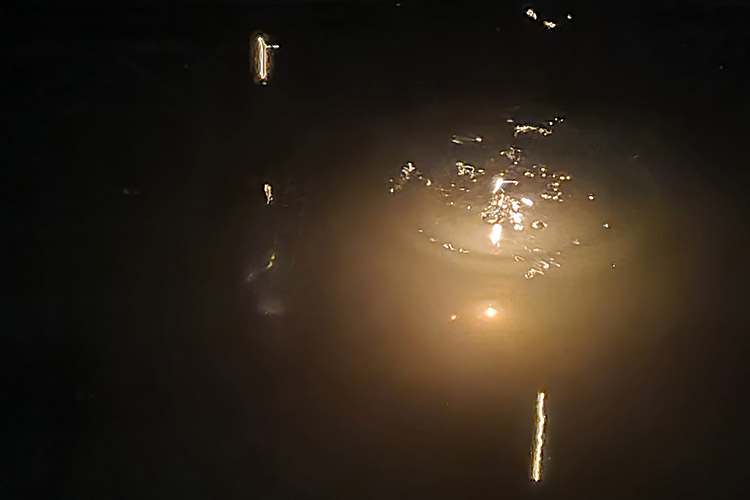 Among the national pavilions in the Arsenale is the Malta pavilion, which, through the power of Arcangelo Sassolino's installation, does not leave one indifferent. The artwork, entitled Diplomazija Astuta, which is placed in the dark, is fenced off with railings to prevent us from getting too close. They are in fact there to protect us from the drops of molten metal that flow from the ceiling. Our attention is drawn to the sounds they make as they discreetly cool on contact with the water in seven containers. A phenomenon that is probably commonplace in the steel industry but which, when recontextualised in the field of art, fascinates. Magmatic tears vertically stripe the space of the artwork in a sustained and regular manner until the surface of the water reveals them. As they sink into the darkness of the tanks, they lose their luminosity and disappear completely. Steelwork is an essential component of the industrial revolution, yet it is the forces of nature that come to mind. We think of the floods of fire caused by erupting volcanoes or by meteorites entering the earth's atmosphere and, above all, of the powerful symbolism that emerges. 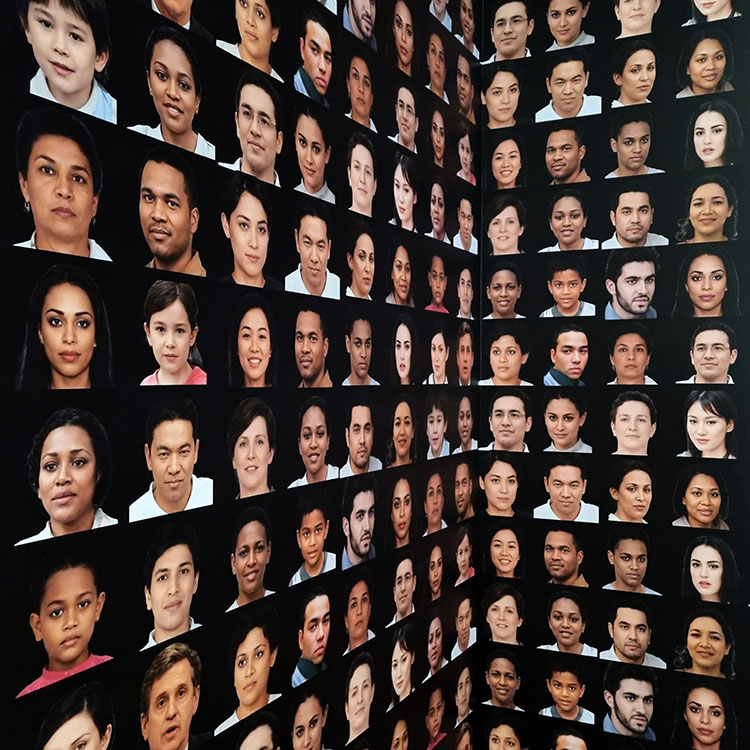 Cecilia Alemani has been entrusted with the general curatorship of this 59th Venice Biennale. Her exhibition, entitled The Milk of Dreams, is located in the main pavilion in the Giardini and in the Corderie dell'Arsenale. There are many more women artists than ever before, and Lynn Hershman Leeson is a notable presence. This year she received a special mention for her career-long approach to technology in art, which continues with the installation Logic Paralyzes the Heart, which is about the figure of the Cyborg. This idea that the logic of machines could harm feelings is interesting. Knowing that science fiction is populated by beings who, augmented by some technology, have lost their humanity! On the other side of the wall, there are two prints of faces that photography encourages us to consider as real flesh beings. However, this is not the case, because neither the child (Missing Child, Cyborg) nor the woman (Missing Person, Cyborg) are, because an artificial intelligence has calculated every detail. Might we already be missing beings that do not yet have a real existence? 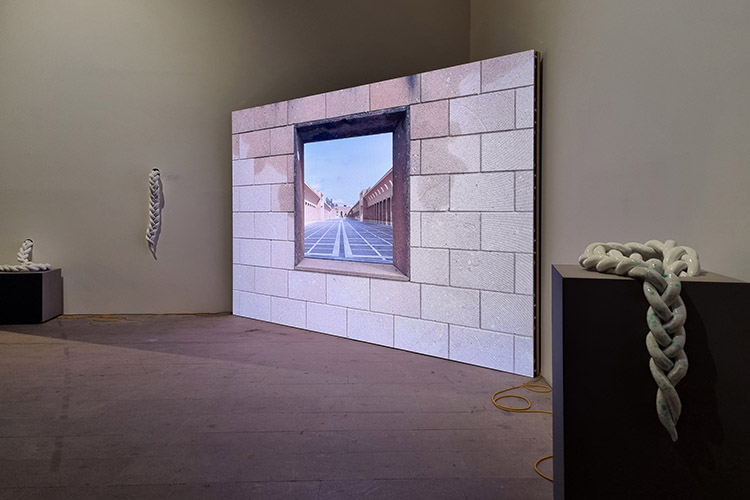 “U Scantu”: A Disorderly Tale by Elisa Giardina Papa is a particularly detailed video installation in that elements have been extracted from the image to stage the projection. While the accompanying voice-over is a testimony to orally transmitted tales. The main setting is the postmodern city of Gibellina Nuova in Sicily. Its monumentality, its perspectives, the fact that it is lifeless, everything evokes the concept of the ideal city that the Italian humanists once cherished. It then appears that the concrete utopia has been reinvested by a group of young women practicing audio tuning on bicycles. A very localized trend reminiscent of the sound systems of the Kingston ghettos in Jamaica, recently reported in The Guardian. The multiple aesthetic collisions in this film, which could also be described as Post Internet in its form, given the use of the frame within the frame, would probably not have displeased the Italian master of cinematic strangeness, Federico Fellini, who no doubt, would also have been inspired by the strange practices that YouTube transmits today. Practices that the artists of Elisa Giardina Papa's generation also embrace.

Performance to the digital age 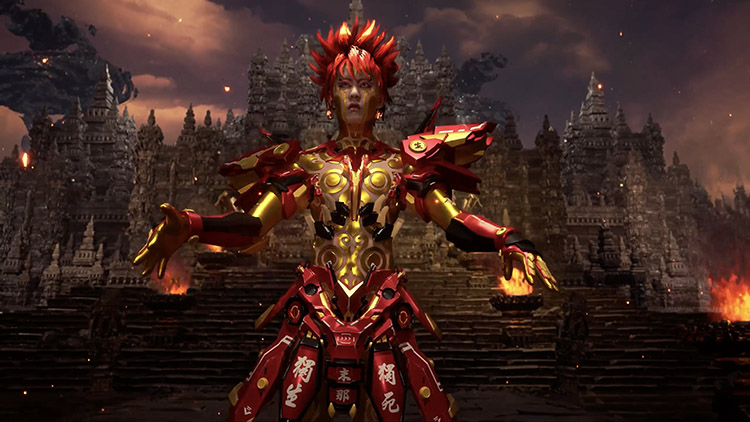 The three-dimensional film presented by LuYang at the Corderie dell'Arsenale appears to us as an assembly of several levels of reality. It is of the order of those half-awake dreams one has on a plane in front of a screen where news is intertwined with fiction. Nothing in Buddhist culture is truly real, so what is on the screen is no more or less real than what surrounds us. But let us return to the creation of Doku, whose production really began in the Motion Capture studio that digitised the artist's emotions, which were then used to refine his genderless avatar within a game engine, which is none other than her real studio. The video game is omnipresent in this creation, both in terms of aesthetics and subject matter, in what should be considered as a performance. The sets follow one upon the other to the rhythm of electronic music to which the avatar, in various costumes, performs dances with gestures that combine tradition and modernity. Identity is central in this era where the emerging metaverse can finally allow us to embody whoever and wherever we want to be. Unless, as the video performance Doku suggests, we are more alone than ever. 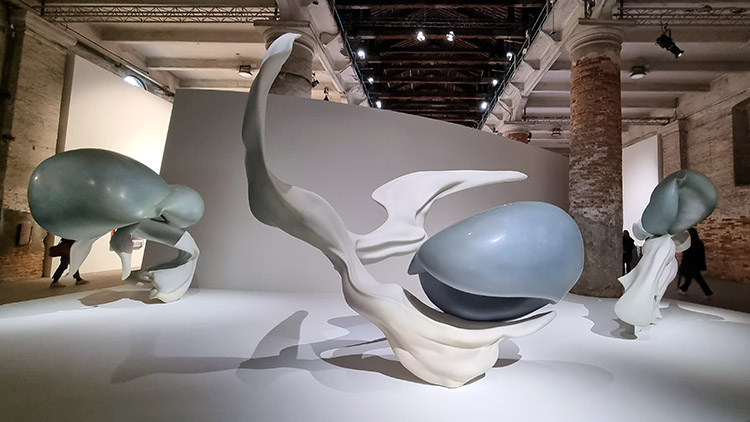 Lastly, there are the monumental sculptures that make up the installation Migrations by Margueritte Humeau, who lives in London and is represented by the Clearing and White Cube galleries. The French artist studied critical design and there is always a fact or an intuition behind her creations, which evolve in the course of her exchanges, notably with scientists in multiple fields of expertise. In Venice, their shapes, textures, and colors evoke some of the marine ecosystems from which they may have been extracted. We don't know if they are extinct, existing, or future life forms. It may be pure speculation when the generic title, Migrations, attributes to them a form of intelligence, if not instinct. In any case, the creatures in question here have in common that they have been frozen in their movements and apparently belong to the same species, possibly in the process of becoming. Margueritte Humeau's sculptures initially take shape through drawing, but one can guess the use of both modeling technology and machining techniques that greatly contribute to their resolutely contemporary aesthetic.