The imposing BioMedia exhibition at the ZKM in Karlsruhe, directed by Peter Weibel, questions “Media with Life-like Behavior”. The installations of some fifteen artists exhibited in Germany are also presented at the Centre des Arts in Enghien-les-Bains. 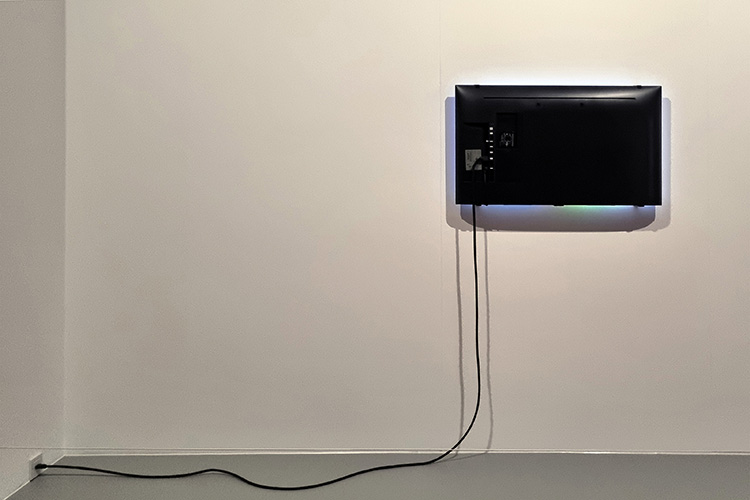 To organize this exhibition, which examines the organic behavior of technological components, the director of the ZKM collaborated with curators Sarah Donderer and Daria Mille. It is hardly surprising, given this theme, to find an installation by Samuel Bianchini, whose attachment to objects with behaviors is well known. Snakable takes the form of a screen strangely oriented towards the wall that supports it, reflecting the light of the images shown. The subject of the work is therefore elsewhere when it appears to us that the cable that feeds it with video, literally contorts itself like a snake in action. The behavior of this technical cable is most animal-like and we amuse ourselves imagining that it is linked to the message. It is as if the flow of information were trying to extricate itself from the constraints of its own broadcasting in this era of extreme multiplication of digital media.

The origin of painting 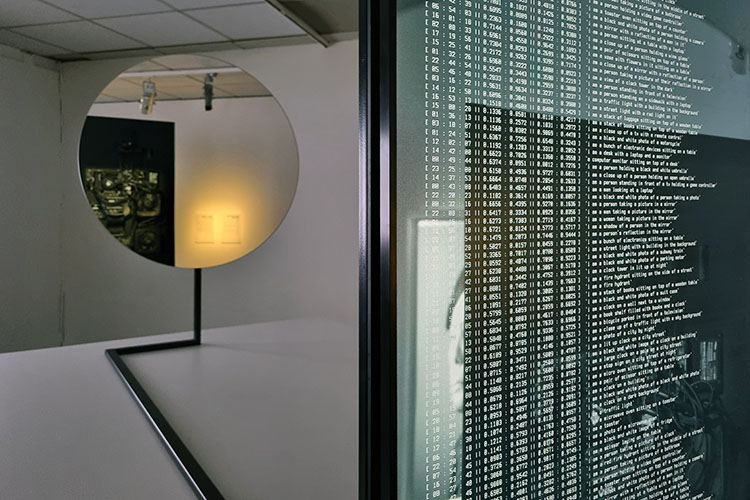 The media and machines are thus in the limelight when the screen of another installation, just as strange, draws our attention. Christian Mio Loclair's Narciss is likewise present in the Centre des Arts. It also consists of a screen, but the back of which, still visible, is equipped with a computer and a camera filming itself in the mirror facing it. Nothing is hidden here, even the code of the artificial intelligence application, which we can guess is analyzing the situation. This decidedly human behavior refers to the story of Narcissus, whom the Quattrocento humanist Leon Battista Alberti considered to be “the inventor of painting”. One also thinks of Nam June Paik's TV Buddha (1972), in which the deity observes his image on a closed-circuit television. Christian Mio Loclair's idea of including a form of intelligence, that we know is without consciousness, into the loop is interesting. Especially considering the effect this ‘enigma’ has on the projection audience!! 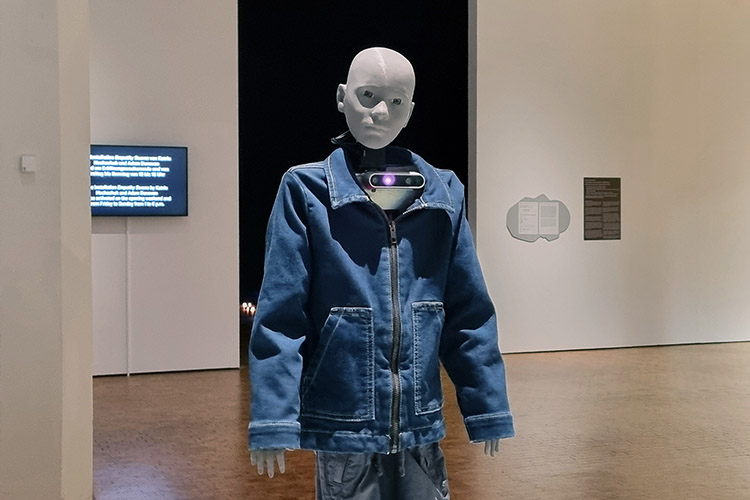 Anna Dumitriu & Alex May present two different versions of their creation Cyberspecies Proximity at BioMedia: a robot in Karlshrue and its virtual double in Enghien-les-Bains. But the aesthetic challenge remains the same: empathy. For in both cases, the humanoid robot engages the members of the audience with a body language that is as limited as it is effective. Equipped with a motion sensor, it can respond to requests by moving its arms. But it is by nodding its head that it acquires a truly human touch. Because its body is as frail as its movements are slow, it poses no threat, unlike the robots of Boston Dynamics, which sometimes frighten us with their technological prowess. The appearance, like the gestures of robots for domestic use, is essential. These two artists who, in the field of art, prepare us to welcome them, know this very well. 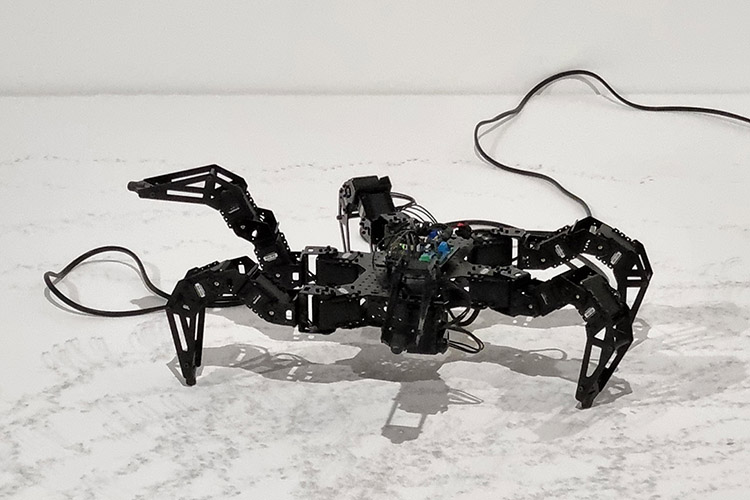 At the ZKM, as at the Centre des Arts, the robots follow one another but are not alike. Fabien Zocco's robot, for example, looks like an exceptionally large spider. It wanders around the game zone that has been determined for it, where its activity appears somewhat irregular. These changes, which could be attributed to the mood of the machine-animal, are in fact a consequence of the emotional state of the human-artist, who is equipped with a connected bracelet for the duration of the exhibition. Anyone wearing such a device (bracelet or watch) unknowingly feeds a kind of virtual double into the realm of data. The French artist reveals this other that his emotional / physiological state feeds, while probably forgetting that he is here, in the sphere of art, and elsewhere, in everyday life, at the same time. This refers to the 1993 book by the American performer Allan Kaprow: Essays On The Blurring Of Art And Life.

A music of exchanges 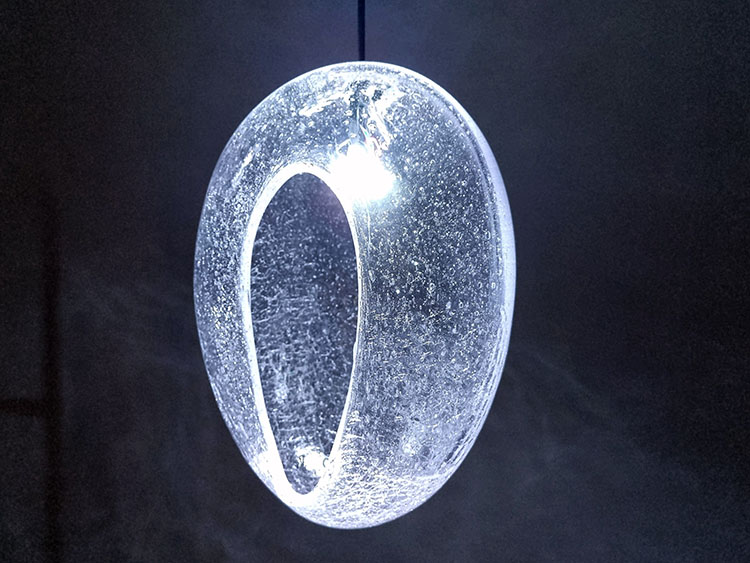 The question of activity is also central to Justine Emard's light-sound installation Supraorganism. Although, in this case, the activity is authentically animal, that of the bees of a hive that the artist has participated in tracking down one after the other through images to feed a machine-learning application, and thus obtain data. It is with such data that she activates in real time the blown glass elements that intermittently make sound, and light up. To the point where we perceive a music of exchanges that the light magnifies. The objects that we might consider as autonomous instruments of an orchestra without instrumentalists, become to our ears as well as to our eyes, after reading the wall text label, diverse individuals of a community with a collective intelligence. There are many ways to envisage this artwork whose reflections, from floor to ceiling, are enough to create the experimental form of a living cinema. 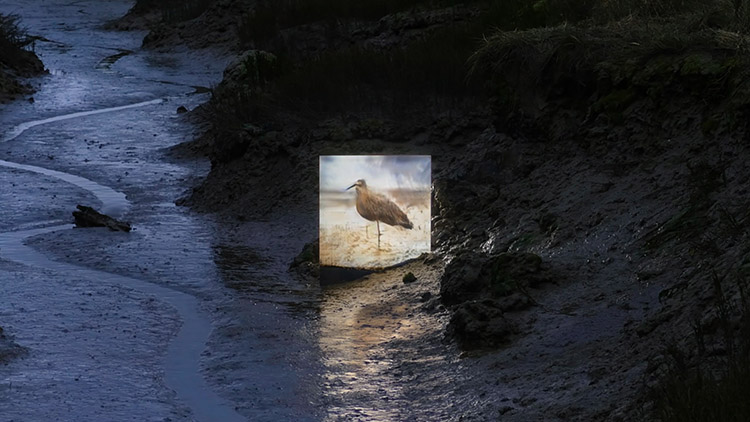 Lastly, there is the video installation CUSP by Jake Elwes, which is rigorously the same in the two exhibition spaces. The artist first trained a network of artificial neurons to design birds in the image of the countless birds in the data set provided. The resulting sequence is a transition without beginning or end of plausible representations of birds. But to present it to us, the artist set up a projection screen in a marshy area of Essex in the UK. This is how the machine simulacra of birds rub shoulders with their distant real-life counterparts. Here we are tempted to confront the plausible with the true by reconsidering, in this digital age, all that is plausible rather than true in this incessant flux of the permanent rearrangement of the pixels of our environment. And the artist says of the Essex marshes in the Centre des Arts catalog: “I have very fond memories of the black mud I wallowed in as a child”.

May 12, 2022 - By Dominique Moulon, for Art Press, translated by Geoffrey Finch.