This year, the art [ ] collector prize founded by Evelyne and Jacques Deret was awarded to Thibault Brunet. This gave rise to an exhibition entitled Mondes Persistants & Pratiques Exploratoires at 24 Beaubourg. An opportunity to penetrate the aesthetic of this artist oscillating between the pictorial and the photographic. 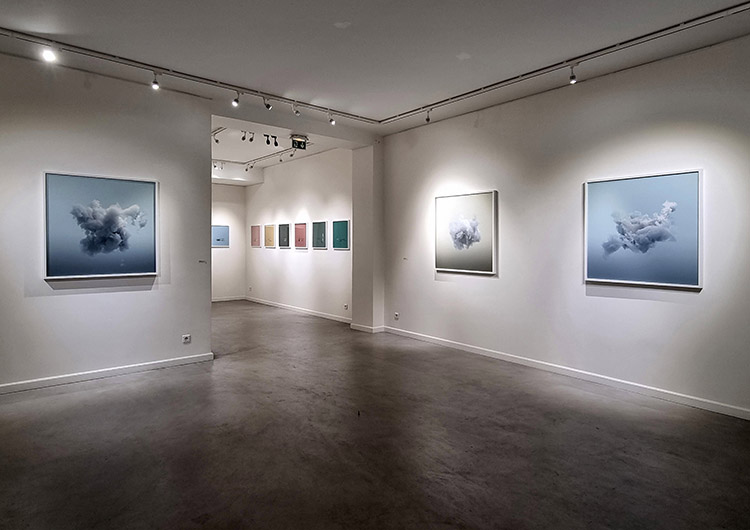 Thibault Brunet collects points of view, in the immediate as well as at a distance, while continuously dialoguing with the history of the image and the art of shooting. He summons the origins of the photographic medium when he captures territories with a laser that he literally circumscribes in extended durations, annihilating any idea of movement. One thinks of Louis Daguerre's Boulevard du Temple, where passers-by have disappeared during a long exposure. The black circular surfaces of his Circumscribed Territories mark the initial positions of the capture devices. Back in his studio with multiple interfaces, the artist then edits the points of view of the three-dimensional spaces of his territories. The freedom of movement he enjoys is total, like that of a bird in full flight, it recalls the practices and uses of certain video games. The pictorial is also omnipresent in the aesthetic that Thibault Brunet develops over time, like a watermark. Although no brush has ever touched the interiors or objects of the banal, he illustrates with uncertain contours that melt into the darkness of absence. And when he approaches this very particular space, the stairwell, it is with the meticulousness of a filmmaker that he operates, using complexity as the only trigger of suspense.

The title of his Black Box series inevitably refers to the technical part of photography, although in this case it is about images of others. Thibault Brunet has collected a broad range of professional and anonymous shots of the Syrian Civil War by scouring the Internet. And it is by merging multiple views that he recomposes the ruins of sites whose latitudes and longitudes are the only things he knows with precision. Manipulating the virtual cameras of such syntheses of anonymous shots, he captures however a relative experience of the landscapes of ruins reconstituted in photogrammetry that he explores like an archaeologist. In the solitude of his studio, Thibault Brunet accumulates intimate knowledge of places of which he knows the value of the ça-a-été (it was thus) dear to Roland Barthes without having physically been there. In doing so, he shifts the lines between the non-artists and the artist as well as between the documents and the work.

By drawing up the typologies of image-objects, Thibaut Brunet practices a form of appropriation that is very Duchampian. He magnifies the buildings modelled by ordinary people who enhance their neighbourhoods on Google Earth by isolating them on flat areas of colour that delicate shadows convert into infinite spaces. When it comes to gas stations, he revives a photographic and pictorial tradition as much as he participates in a form of archaeology of the media. This regarding their announced disappearance from territories as well as from maps. Concerning the clouds he acquired on the Internet, like the artists Pierre Huyghe and Philippe Parreno acquired the character of Ann Lee from a Japanese company at the end of the last century, Thibaut Brunet brings them together as if to better study them. His three-dimensional sketches of clouds express the capacity we have today to model everything to better understand it. Thibault Brunet's clouds speak of our time as much as those of Correggio spoke to the art theorist Hubert Damisch.

Finally, when Thibault Brunet infiltrates the online game Minecraft, with its 140 million users, it is another community that he assimilates in the company of researchers. The project is sprawling, on the demiurgic scale of the game. And the artist becomes sometimes architect and sometimes landscaper to sculpt the territories of his views from above. The samples, whose extractions he also organizes as geologists do, evoke the idea of parcels, therefore of belonging, which is inseparable from the Metaverses of this new gold rush of which we have recently been informed. There are indeed few explorations in the history of humanity that do not end in conquest. Except for artists, painters, or photographers, who document them in the persistent worlds that we increase with our avatars by practicing as many immobile journeys as there are universes to discover online, in the virtual. Precisely there where the artists of this post-photographic tendency of this art from find inspiration, by sourcing ideas as much as forms to recontextualize them in the field of art.

Typologies of the Virtual 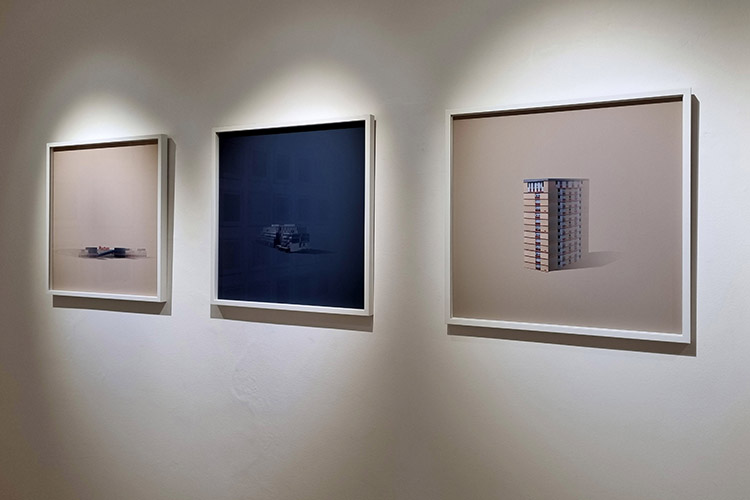 The application Google Earth owes its level of detail to the ordinary people who constantly increase it by modelling their environments. It is within this database that Thibault Brunet samples architectures to recontextualize them within delicately coloured spaces. This was initiated at the scale of the metropolitan territory of France in 2014 as part of the photographic mission France Territoire(s) Liquide. It was carried on in 2022 on an international scale with representations of gas stations, which are known to recur in the history of painting as well as in photography, acting as witnesses of an architecture that is in the process of disappearing. 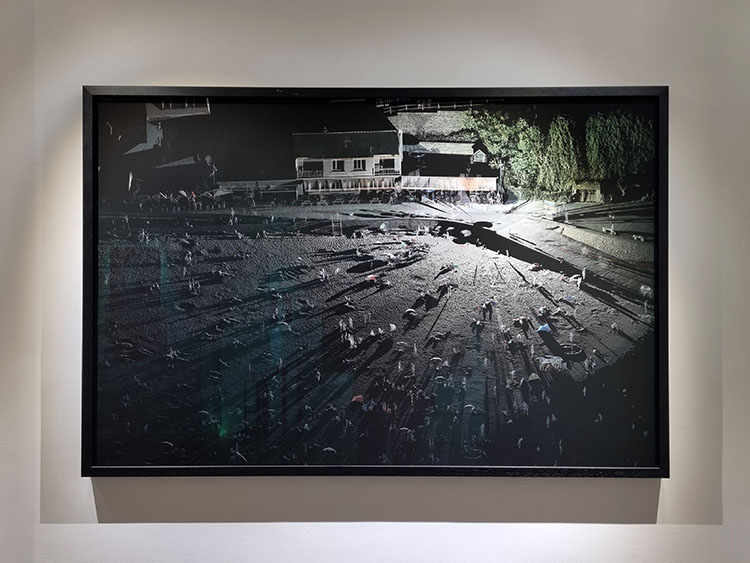 Circumscribed Territories are the result of laser captures whose acquisition times refer to those of the daguerreotype. The relative obscurity of their respective settings emphasizes the lack of information more than the absence of light. As for the points of view, Thibault Brunet literally ‘invents’ them within the three-dimensional spaces of his applications. The granularity of images obtained with such processes or procedures is emphatically pictorial. 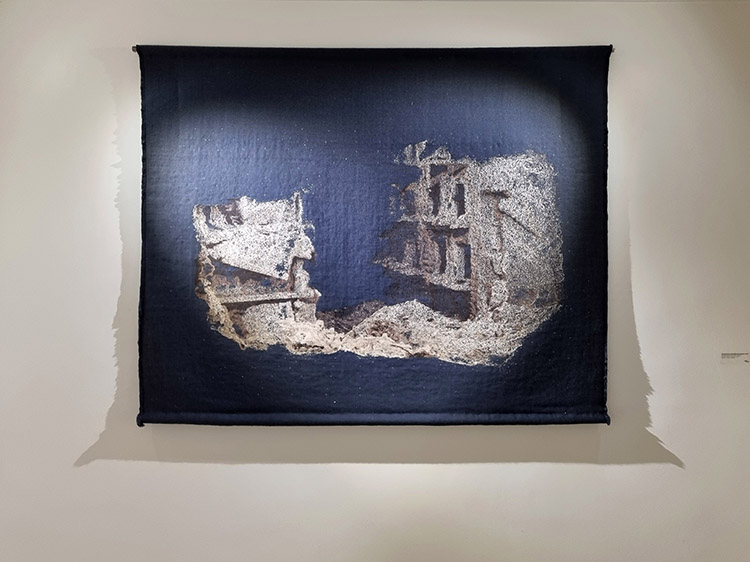 Photogrammetry allows professionals to obtain three-dimensional models of places or objects they have captured. Thibault Brunet diverts it to merge the looks of those, possibly anonymous, whose images testify to the desolation resulting from the Syrian civil war. It is thus with a certain form of distance, which we know the Internet abolishes, that the artist treats the subject ‘ruin’. 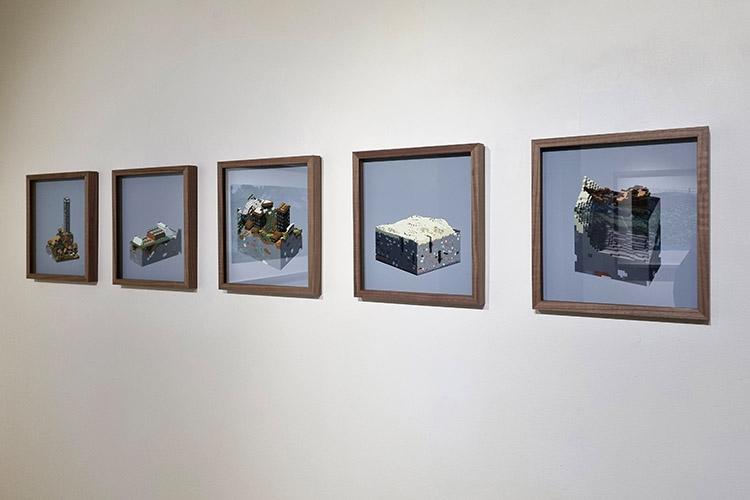 For two years, in the company of researchers from the CNRS, IGN and the INRAE, not to mention the presence in the team of people who work with text and images, Thibault Brunet surveyed the great spaces of the online game Minecraft. All of them, as true researchers of the virtual, studied complex systems along with other random movements. From this mission, three-dimensional fragments of worlds and bird’s eye views of elsewhere emerge. 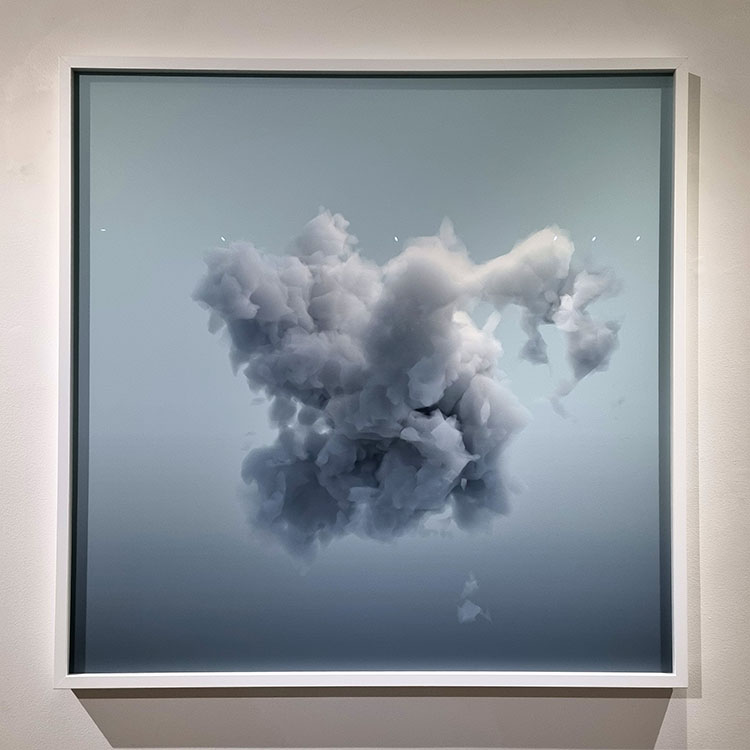 Thibault Brunet acquired three-dimensional models of clouds on a server usually used by game designers, before uploading them to a game engine. At the same time, he created a virtual sun to illuminate them in the hope of revealing their oh so vaporous contours. In doing so, he is in line with the artists who attempt to capture the essential with the ideas and techniques of their time.